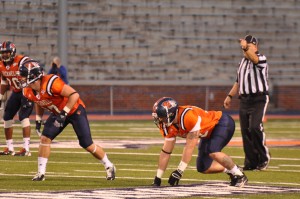 Chloe Chou | The Bucknellian
Bison defenders wait for the snap. Although they kept the score close for much of the game, the Orange and Blue were unable to keep Lehigh from pulling away in the fourth quarter.

On Oct. 20, the Bison fell 42-19 to Patriot League rival No. 7 Lehigh, who improved to 8-0 on the season. Despite having three punts and an extra-point blocked in the first half, the Bison found themselves only down 21-19 in the third quarter, but the Mountain Hawks ended up scoring the final 21 points of the game. Jeremiah Young ’13 was the catalyst for the offense on the day, rushing 23 times for 100 yards and three touchdowns.

Lehigh opened up the scoring in the first quarter, when Bison punter Ryan Gutowski ’13 had his punt blocked by Laquan Lambert, who proceeded to return the punt 60 yards for the opening score. The Bison responded with their own touchdown drive that spanned 69 yards in seven plays and was capped by Young’s first rushing score of the day. The big play on the drive came on a 30-yard pass from quarterback Brandon Wesley ’14 to receiver Josh Brake ’15. Lehigh blocked the extra point, leaving Orange and Blue down 7-6.

The Mountain Hawks extended their lead to 14-6 in the second quarter when Lehigh quarterback Michael Colvin threw his first touchdown pass of the game. On the Bison’s ensuing possession, Lehigh had its second blocked punt of the game, giving the Mountain Hawks the ball at the Bison 15-yard line. Lehigh was able to capitalize, giving them a 21-6 halftime lead.

“We had an issue on the initial extra point where the kick was low and there was penetration in the middle of our offensive line; the block was a combination of both factors,” head coach Joe Susan said. “The first blocked punt was a breakdown in protection and the angle that we were trying to kick the ball in an attempt to pin our opponent. The next two wound up being timing issues in our operation time which we fixed at half time.”

Despite the turnover plagued first-half, the Bison came out strong after halftime by scoring on consecutive drives to close the deficit to 21-19 thanks to Young’s second and third rushing touchdowns of the game. The second touchdown drive was set up with an interception by safety Matthew Steinbeck ’15.

“On the interceptions, I remembered watching film on [Colvin] during the week and knew what types of throws he made,” Steinbeck said. “The two picks I just read him and knew his tendencies which put me in the right place at the right time.”

This one gave the Orange and Blue the ball at midfield, and a pair of Wesley passes to Young and receiver Victor Walker ’14 helped the Bison pull within two points. Unfortunately, the Mountain Hawks proved why they are one of the top ten teams in the country by scoring the game’s final 21 points while holding the Bison to 31 yards of offense the rest of the game.

Wesley had another solid day guiding the offense, going 12-22 passing for 164 yards, including 5-5 for 108 yards on the three touchdown drives. He unfortunately was sacked five times in the contest. Despite the loss, the Bison played a solid game defensively, led by co-captain Beau Traber ’13 and his ten tackles.

The Bison were undone on their third down conversions, converting on just one of 13 opportunities, while Lehigh connected on six of 13 conversions.

The Bison open up a two game home stand when they take on Colgate for the annual Homecoming Game. Kickoff is scheduled for 1 p.m. tomorrow at Christy-Mathewson Memorial Stadium.

“We play with the advantage of a homecoming crowd. Keeping the crowd in the game will be a critical factor through the game,” Susan said. “In order to do this we must do a great job of defending the run. We have to find a way to take an early lead.”

Steinbeck believes the team can use its never-say-die attitude in the Colgate game.

“The hustle and effort we gave on every play will carry over into the Colgate game. Also I like to think we never give up. We keep playing to the last whistle,” Steinbeck said.