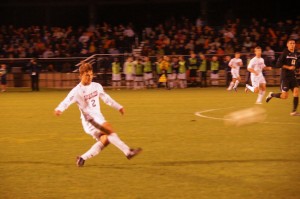 Conor Pierson | The Bucknellian
Joe Meyer ’14 passes the ball downfield. A very late goal against the Bison gave them a loss and moved them one spot out of playoff contention.

The men’s soccer team fell to Army 2-1 last weekend at home, dropping the team to 1-2-2 in league play and one spot out of the playoffs. The loss came as a result of a late goal with 13 seconds remaining on the clock, after a game-tying goal by Collin Costello ’13 less than a minute before.

“The result is obviously disappointing and puts us in a tough situation in the Patriot League with only two league games left,” Costello said. “The game of soccer is sometimes cruel, and the team that dominates most of the game does not always come out of the game with a win.”

The Bison fell behind early and were forced to ramp up their offensive pressure for the remainder of the game. This sense of urgency became more apparent in the second half, when the Bison outshot the Black Knights 14-4, stringing together a series of close attempts. With 56 seconds remaining, Costello finally found the back of the net for the Orange and Blue, knotting the game at one apiece.

Looking as if the game was headed into overtime, the Black Knights put together one last push resulting in the game-winning goal. For the Bison, the loss is particularly tough to take because they outplayed their opponents for the vast majority of the game. Ending the game with 19 shots to Army’s nine, the Bison controlled the ball well, but couldn’t capitalize on key chances throughout the contest.

Although they hold just one league win, the Bison are still very much in the playoff hunt. One point away from fourth place, the Orange and Blue have two more chances to earn valuable points against Colgate and Lafayette.

“While a loss never feels good, we are still confident as a team that we have the ability and desire to win our last two Patriot League games and make it into the playoffs,” Costello said. “As a team, we have still not put together a full 90 minute effort. If we make sure we take care of the details, are confident in our abilities and finish our chances, we will be successful versus Colgate this weekend.”

The Orange and Blue did get a boost of momentum on Tuesday by taking down NJIT 1-0. Patrick Figgie ’16 recorded the lone goal for the Bison in the 23rd minute, but it proved to be enough due to a strong effort by the defensive unit. Goalie Mike Lansing ’16 made five saves and recorded his fourth shutout of the year.

Standing at 6-6-4 on the season, the team enters a pivotal stretch in their season. Their push for a playoff berth begins this weekend when they host Colgate tomorrow at 4 p.m.