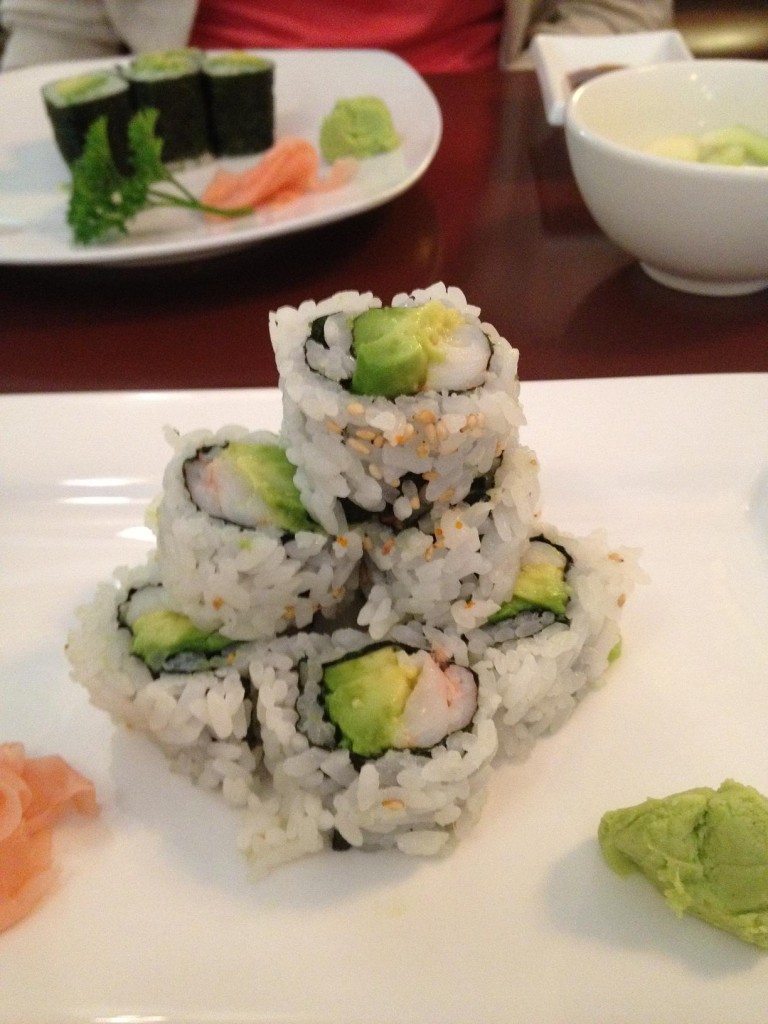 When the news came this spring that Marco’s Tapas would be closing its doors, many students were upset by the loss of one of their favorite Market Street restaurants.  What they didn’t know was that Sushihanna, a Japanese restaurant specializing in sushi, would be taking the tapas bar’s storefront location.

Located at 432 Market Street, between The Chamberlain Building entrance and The Open Door Framing Gallery, Sushihanna is sure to be a popular lunch hot spot with students this fall.

On my recent lunch trip to the new restaurant, I ordered one of their lunch specials: a tuna roll and a shrimp avocado roll for $9.45.  My friend ordered a simple avocado roll for $3.00.  Each came with a small bowl of sesame cucumber salad.

We both found the amount of food for the price to be typical for downtown.  Even for heavier eaters, prices are still reasonable.  Even the more expensive shrimp tempura roll is only $6.9, and a Hibachi dinner of chicken is $9.95.

Beyond the prices, we were impressed by the food and speed of service.  We were able to walk into the restaurant, order, eat and pay our check in just under an hour, something not frequently found in Lewisburg.

My tuna and shrimp avocado rolls were great.  No longer will I have to drive to Wegmans in Williamsport or State College for a decent roll; I can just walk downtown for a well-crafted roll and avoid the repeated disappointment from the sushi at the Bison.

My friend called her avocado roll “simple, but tasty.”  Not only was she referring to the food itself, but also the presentation.  The clean look of the plates allowed us to focus on nothing but the meal.

All in all, we found Sushihanna to be a nice addition to the restaurants downtown.  It gives us one more cuisine option to add to our current haunts.  It will most likely compete most directly with Pronto!, based on its attraction of lunchtime clientele.

By Tracy Lum and Rob Duffy

A fire tore through White Pine and Hawn alleys between South Seventh and South Eighth streets early Tuesday morning, leaving in its wake the charred, skeletal frame of a barn and a line of burned cars buried in rubble.

University students and Lewisburg residents say they heard loud explosions and pops and saw smoke before 40-foot orange flames emerged in the sky at around 1:15 a.m. Witnesses said the fire began in a barn containing several cars located in the center of the alley and later spread across the lane, catching a dumpster and another garage and house on fire before the first fire engine arrived on scene. The barn belonged to Brian Gockley of the University’s Teaching and Learning Center.

“It was shocking to wake up to that terrible blaze,” Gockley said. “It was hot, it was frightening. We were fearful it would spread to other buildings.”

Doug Shribman ’11 and Gerry Runyan ’12 were sitting in the living room of their house on Seventh Street when they saw police cars coming down South Seventh Street. “We got out before the fire started and saw smoke coming away,” Shribman said. The two then began calling neighbors to alert them of the fire and tell them to evacuate their houses.

“I was scared at first, especially since all the ash was blowing toward our house,” Runyan said, adding that he saw “burning pieces” falling out of the sky. Lewisburg residents said they saw ash on the other side of town.

Robin Hammersley ’11, who also resides on Seventh Street, said she saw the flames and “heard a lot of noise.” She and neighbors all came out of their houses and watched the fires burn until around 3:30 a.m., when the fire was mostly out.

According to witnesses, police officers evacuated nearby houses. University students who lived in the vicinity were also evacuated.

The fire also spread to a telephone pole and the surrounding electrical wires, according to witnesses on the scene.  In total, eight buildings caught fire–-four were total losses, three were safe and one was mostly gone.

“We’re saddened by the loss but grateful there were no injuries to people,” Gockley said. “We’ve got a lot of cleaning up and rebuilding ahead.”

Student volunteer firefighters including Michael Stagnitto ’13 and Warren Ziegler ’13 responded to the dispatch. Seven fire engine companies responded, and just over 70 firefighters were on the scene at the peak of the call. The scene was cleared at 5:30 a.m.

No injuries were reported, and the cause is still under investigation.

Fire marshal Norman Fedder was unable to be reached for comment.