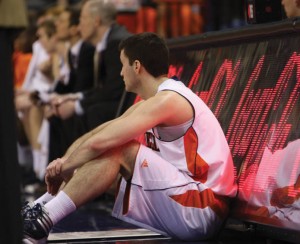 Bryan Cohen ’12 and the Bison fell just short of completeing a last-second comeback, falling to C.J. McCollum and the Lehigh Mountain Hawks in the Patriot League Championship.

Despite a 30-point, 14-rebound effort by Mike Muscala ’13, the men’s basketball team could not hold off a surging Lehigh squad in the Patriot League Championship Wednesday night, falling in heartbreaking fashion 82-77.

Entering the game riding a four-game winning streak, the Orange and Blue were met by a Mountain Hawks team who had issued the Bison their first Patriot League loss of the year back on Feb. 16 after C.J. McCollum hit a game-winning three-pointer with one second remaining on the clock.

McCollum proved to be the hero once again for Lehigh in the Championship contest, recording a team-leading 29 points, including two game-clinching free throws with 4.1 seconds remaining.

In front of a sold-out crowd at Sojka Pavilion, the Bison struggled early on in the contest, recording just 15 points through the first 10 minutes of play and allowing the Mountain Hawks to enter the half with a seven-point lead.

After four minutes of back-and-forth play to open the second half, the Bison strung together a series of consecutive scoring possessions over the next three minutes of play. During the stretch, forward Joe Willman ’13 hit a clutch fade away jumper to bring the score to within one, and then Brian Fitzpatrick ’13 hit one of two free throws, tying the score at 50. Willman recorded 10 points and six rebounds during the game and was named to the All-Tournament squad after recording 18 points in each of the first two tournament games.

Behind the stellar offensive play of McCollum and Gabe Knutson, the Mountain Hawks gradually extended their lead for much of the remainder of the game. With just under a minute left on the clock, the Bison trailed 78-71 and looked all but done. Yet over the 30 seconds, Bryson Johnson ’13 netted a pair of three-pointers to bring the Bison within one.

After fouling and repossessing the ball with 26 seconds left, the Orange and Blue could not capitalize on a tough lay-up try by Cameron Ayers ’14 and lost possession. From then on, Lehigh hit four free throws to extend its lead to five and claim the program’s second Patriot League title in three years.

With the loss, the Orange and Blue are eliminated from NCAA contention. By virtue of their regular season championship, the Bison did clinch their first-ever birth in the National Invitation Tournament.

With the Sojka Psychos standing just feet from the court for Bison basketball games, there is not much separating the fans from the players on the court. There is one group of Orange and Blue fans that sit even closer to the action—the Bison cheerleading team.

Every year, no matter the records of the Bison basketball teams, the cheerleaders come out in full force to support their school. The team brings enough energy to supply the entire Sojka Pavilion, even when over 4,000 fans are in attendance.

For most of the team, being a cheerleader means taking their school spirit to the next level.

“Being an enthusiastic and agile cheerleader combines my talent for dancing and performing with my love for basketball,” Mikaela Soto ’12 said. “It’s the most amazing way to be a part of the game and support the sport and the players I love to watch.”

“The best part of being a cheerleader is feeling like I am a part of something bigger than myself,” Sarah Jane Abbott ’12 said. “We get to support our Bucknell football and basketball teams and promote Bucknell pride and spirit in the entire student body.”

Although the squad is not officially a Division 1 team, it is still recognized by the University as a varsity team and still trains like any of the other Division 1 programs this school offers. The team practices between once and twice a week, and lifts two other days a week. But unlike other sports teams, the cheerleaders are in season for both the fall and winter, cheering once a week for the football team and often twice a week in basketball season.

This season, led by coach Megan Lindner and captain Melissa Fuller ’11, the cheerleading squad has had a much easier job than in years past. With the top-ranked men’s basketball team and a strong women’s squad, Sojka has been home to many Bison victories this year. Concurrent to the basketball team’s recent success, the cheerleaders have improved.

“This year we definitely stepped up our stunting game and fans are really noticing us — especially the Superman stunt with Sarah Jane,” Ashley O’Connor ’13 said. “That one’s the best.”

The cheerleaders’ success is impressive, mostly due to the number of newcomers they have on the team.

“The best part of this year’s cheerleading team is our new freshman,” Abbott said. “Every one of them works so hard and displays so much dedication and team spirit each and every day. It is a privilege to cheer with them.”

“This year’s squad is such a dynamic group of girls that it makes games fun and interesting for us,” Julie Cannon ’14 said. “We also support each other really well which boosts squad morale and makes all the time we have together very fun.”

In the end, though, the cheerleaders are no different than the rest of the Sojka Psychos in their love for the basketball team and the atmosphere of Sojka Pavilion.

“The best part of being a cheerleader is getting a front row seat for all of the games,” Cannon said. “Sojka Pavilion is such a great place to host games. Because the student section pans behind both baskets, it really makes the games fun to attend and fun for us to cheer for.”

For the cheerleaders and the rest of the Orange and Blue fans, the last game for the Bison this season will be Friday afternoon. Expect to see the cheerleaders give it their all while cheering for their team, just like they have all year, because Bison basketball is their passion.

“Being able to stand on the sidelines in Sojka Pavilion, the loudest arena in the Patriot League, as an integral part of the scene, I just can’t get enough,” Soto said. “Between the fan frenzy that surrounds us with orange and blue, and the tenacity that the team brings to the table — there’s honestly nothing like it.”